London to Istanbul, only by bike, as fast as you can. Any Channel ferry allowed, certain ferries across the Adriatic.
3 intermediate control stops (Paris where the first Tour de France started, highest pass in Italy, a mountain in Montenegro), but the route between up to you.
No helpers. Only use what you start off with, or can acquire en-route.

I finished just in time for the party in 14 days and 8 hours. My Garmin said 3306kms and 36000 and something meters climbed.Like all the very long distance rides I have done though,  I found it frustrating to pass through interesting places without the time to stop and explore, but the Swiss National Park, Bolzano, Ravenna, the whole stretch from Split to Montenegro and on into Peje (Pec) in Kosovo, Plovdiv and Edirne are all marked down to revisit another time.

I mixed hotels, ranging from very basic to posh, with feral. I found two nights out in a row was enough for me and, by the way the hotel staff were staying out of smelling distance from me in Peje, enough for everyone else too. I had a very compressible and light sleeping bag, a liner and a bivvy bag (body sized plastic bag).

I found three stretches very tough. Over the Fluela in Switzerland because of the wet and cold and its extended steep stretches. I got to the little town of Zernez just over the other side and decided to stop for the night, which meant I had no realistic chance then of catching the Ancona Split ferry on the planned Friday. I don’t regret this as it started to pour with rain again. I took the next pass on the way to Stelvio in the early morning when it was almost freezing, but completely dry.

My plan for bad weather in the Alps was to buy clothing locally. This was a flawed strategy - in the small places en route to Davos it was a struggle to find a suitable shop and when I did, I baulked at the three plus times UK price (£150 for a fleece!!) for items I'd wear once. I eventually settled for a roll of dustbin liners, only to find at the top of the Fluela that they were half height (wtf!). The kind lady in the cafe gave me newspapers to stuff inside my jacket for an absolutely freezing descent.

The run from Split to Dubrovnik was brilliant. A full day's ride along a beautiful coast. A large climb to the mountain top control of Mt Lovcen followed.

I avoided the Kosovo-Serbia border as there was a good chance of not being allowed through, so had to go through the northern suburbs of Skopje. Laid out like Milton Keynes but with psychopathic driving - not fun. Still grumpy about it, there was a long stretch in the dark towards Bulgaria which was almost devoid of human life. This is the one time I found the ride doing my head in, but eventually villages returned and I found a hotel for the night (10 euros!) in a small town.

The next morning as I rode out of town I saw a sign saying "Sofia 124" and knew for sure then I would finish.

Like most riders, I found Turkey surprisingly hard, especially as crossing the border felt like crossing a sort of finishing line. Mostly it was long undulations along the E-80 Motorway - which was tedious though I cheered up when offered the chance - declined - of man-on-man bj action. Rather than cut across the city I took a northerly route along a newly built dual carriageway that had much steeper and shorter undulations into the face of a very stiff headwind off the Black Sea. So stiff that I had to pedal downhill and at one point I realised I had done 4km in 30 minutes. The frustration of being so close but so slow almost had me in tears, not helped by the enormous numbers of gravel trucks (new building is going on around Istanbul on an epic scale) rumbling past at speed: within inches on the older, unwidened sections.

Otherwise some rough and some busy roads, some stretches where I could not follow the planned route for some reason or another and slow bits with some navigation problems going through big places like Paris and Zurich and the endless sprawl of resorts around Rimini. Apart from that, mainly enjoyable and occasionally, like the flatlands of Italy, boring. I ground slowly up the Stelvio with its 49(I think) hairpins, but it looks worse than it is as a steep ramp is usually followed by a gentle one.

My nights in the open were an experience. In France my headlight connection proved impossible to fix in the dark, so a night in the open behind one of the rare hedges in the prairie east of Paris, with a fine starry sky and a wind farm nearby. The stops in Montenegro were a beach recliner and then a night down what I thought was a forest track but turned out to be a drive to a  house. I shrank into the forest as the owner's BMW drove past. My last night out was two hours in a Turkish Motorway culvert.

The Swiss have more or less licked the issue of urban and main road cycling. Well thought out cycle tracks (including tunnel sections) and easy to navigate through the towns. 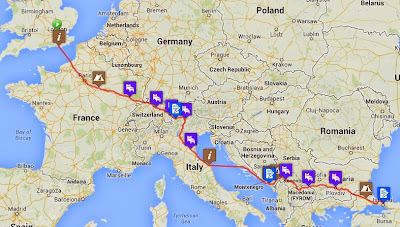 A full track on a Google Map is clickable here

Taken on a failing old Samsung S2 which shared space with my snacks (hence the smeared soft focus effect) and a little Lumix camera with a decent lens.

In terms of preparation, I have ridden 9000kms this year before the event, 8000 since March, mainly commuting (17 miles a day) and rides of 200-300kms. The 1300Km Highlands, Glens and Western Isles Audax was almost a dress rehearsal and I learned a lot - like TAKE MUCH LESS - from it. I took a lot of care over route planning, bought good lightweight kit for the feral stuff and ensured my trusty titanium steed had new components where needed, that would last the distance. Perfectly OK, but used chain, tyres and cables were replaced and the new ones tested the weekend before the start.

I only had minor problems en-route. I had two punctures, some problems with light connections which were tricky to fix in the dark, especially after I had lost my reading glasses and my chain came off a few times. I eventually worked out why, but didn't fix it. I thought it was just getting out of asdjustment, but when I put my bike together again when I was home, found a newish shifter (Campagnolo Veloce) was worn out inside. I put on new brake blocks for the Stelvio and in the pouring rain on the way down, found they were useless. At the first hairpin, I went gently off the end and onto the grass. The rest of the way I had to grip the brakes hard, till it ached, till I got to drier conditions near the bottom. Annoying, as the old pads had worked perfectly down a wet Fluela descent. I added a rucksack called Belinda to my luggage in Troyes and for this sort of ride it was invaluable as a larder and as a place to quickly bung or retrieve clothing layers. In the hotter parts I tied it to my tri-bars during the day.

I had no body problems, except temporarily for my feet and ankles over some very poor surfaces, and I was able to sit in comfort all the way. As I write this part a week later, I am still getting random attacks of the dozies and my legs feel tired. My resting heart rate is still higher than normal. I have a fantastic tanline on my legs and I lost 4kg. Oddly, I started getting leg cramps only after I got home, perhaps the effect of being on a plane.

Food and drink were rarely a problem. A couple of early morning bonks fixed when bakeries opened and I absolutely hated warm water and Nuun isotonic mix out of my bottles by the end. So much so that I threw the bottles away right at the finish. I virtually stopped eating bland carbs like bread and some days my diet was ice cream, chocolate, cheese and salami. Schweppes Tonic, which seems to be popular across the Balkans, became my drink of choice.

I rarely really exerted myself, except for my night-time chased by dogs incident (I really did speed up there!) and the last hour or so when I realised I could still make the finish party in time. I noticed my fat burning improving throughout the ride so I could get by on less and less and carbs and, also, how when I took in carbs I needed extra water for the glycogen - noticing this sort of thing a sign perhaps I was spending a tad too much time on my own. Had I been back in my 20s I probably could have winged it like some of the younger riders did, but I needed the training and preparation.

As other riders have said it was much more than about the riding. I didn't meet other riders much, though Shell and I had a burger stand meal together near Dubrovnik - and none at all after Mount Lovcen - except early on and at the ferries, mountain controls and the end. When you did, it was instant camaraderie from the shared experience. At the top of the Stelvio I was there when George from Greece completed his second ride up (from the allowed side) and a group of Italians met their mates. At Lovcen lots of people arrived at more or less the same time. I was really pleased that before heading off to the airport on the Tuesday we were able to greet Jason Alcock and Martin McConnell as they finished. The lady who runs the Albergo Folgore, the control at the Stelvio, was helpful to us riders in a way that went well beyond what you'd expect of a commercial facility and a heartfelt thanks to her.

It was a fantastic experience and I am really glad I did it, but at 61 I don't think I want to do anything like it again.

The totals are adjusted for untracked segments and don't include ferry sections(the GPX does include ferry The tool I use to get the track on a map under-reports climb, the garmin device overstates it so the real total is probably around 32000m climb.
Posted by Ian Oliver at 10:57 AM No comments: 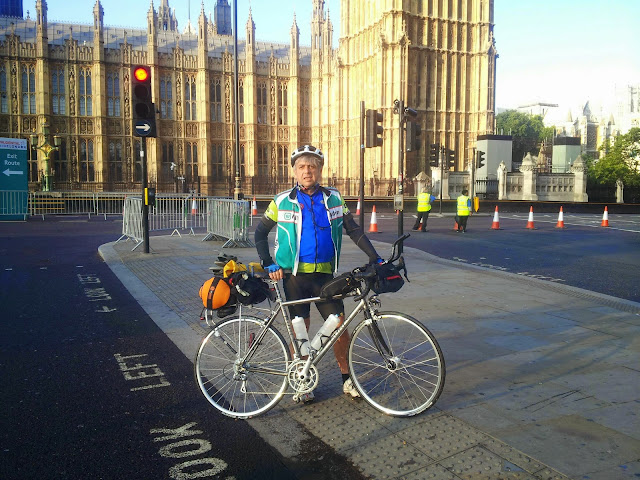 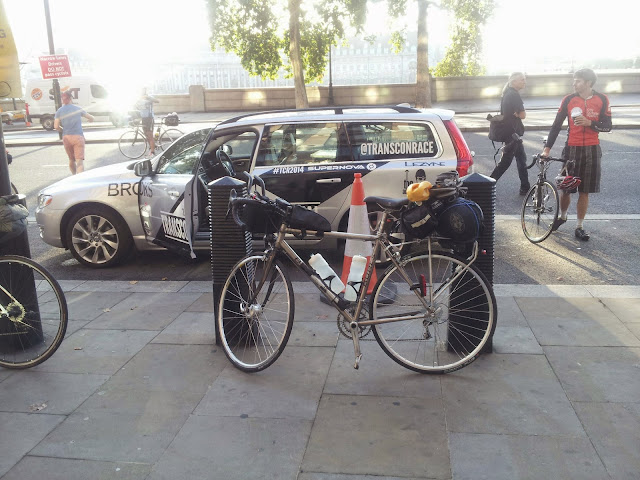 Posted by Ian Oliver at 2:29 AM No comments:

Photo of my clutter

Before it was all crushed in my stuff sack. Obligatory bike pic in the morning. 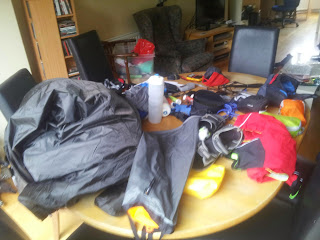 Posted by Ian Oliver at 1:43 PM No comments: